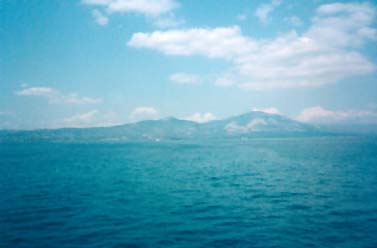 Skyros from the West

On Saturday 10th April 1915, Brooke’s troopship left Port Said for Lemnos. By now, there were so many ships anchored off the island that Brooke and his company were sent on to Tris Boukes Bay off the south west of Skyros. They arrived there on Saturday 17th April, where he received a letter enclosing a cutting from The Times describing how his sonnet The Soldier had been read by the Dean of St Paul’s Cathedral as part of his sermon on Easter Sunday a fortnight previously.

Brooke and his fellow officers spent the following days with their men on exercises. On Tuesday 20th April, during a long day on the island, they rested in the olive grove where the grave now stands: Brooke remarked on “the strange peace and beauty of this valley”.

That evening he began to fall seriously ill: a swelling on his upper lip - unnoticed earlier, and probably a mosquito bite from Port Said - became inflamed. Over the next hours the inflammation spread. A bacteriologist on board identified it as a diplococcal infection - in other words, blood poisoning. Brooke was moved to a neighbouring French hospital ship on Thursday 22nd April. As this was awaiting the injured from Gallipoli, he was the only patient on board, under the care of twelve doctors and surgeons.

Throughout his life, Brooke had been frequently ill with recurrent conjunctivitis and disabling colds. He had suffered severe coral poisoning and inflammation in Tahiti the previous year, and had caught both dysentery and sunstroke at Port Said. Indeed, he had probably been running a temperature for several weeks before his arrival off Skyros, and was ill-equipped to face this new infection.

On Friday 23rd April his temperature rose and he lost consciousness, dying in the late afternoon. Early in the evening, three of his fellow officers took a digging party ashore to the olive grove and set to work. Later, the coffin was brought up the dried water course by a company of twelve Australian petty officers. Brooke was buried shortly before midnight in the dark silence of the deserted valley, amidst the scent of flowering sage.

At 6 a.m. the following morning, the troopship sailed for Gallipoli. Of the five officers who had remained at the end of the funeral to build a cairn, only two survived the war.