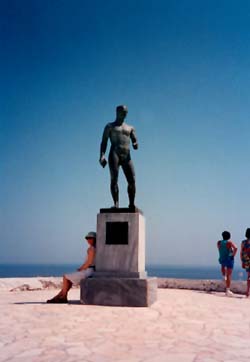 “If I should die, think only this of me:
That there’s some corner of a foreign field
That is for ever England.”

Why Rupert Brooke? Why Skyros?

Skyros lies in the Northern Aegean, the largest and most isolated of the Northern Sporades. The island is sparsely populated, and its small community - who mostly live in its capital - are closely-knit. Despite the variety and beauty of its terrain, it lies well off most tourist itineraries.

The island was first mentioned by Homer, and Achilles hid here until he was called up to fight in the Siege of Troy. In subsequent centuries, it was occupied first by the Athenians and later by the Romans. For almost a millennium it was part of the Byzantine Empire before passing to the Venetians and then the Turks. In 1832 it finally became part of the newly independent Greece.

In the First World War, Tris Boukes Bay (on the south-west of the island) was used as anchorage for hospital ships treating the wounded from Gallipoli. It was on one of these that the English poet Rupert Brooke died in April 1915.

The most visible memorial to this is in Skyros Town itself. High up above the sea, in Brooke Square, stands the “statue of an ideal poet”, pictured here. Funding for this came from a Belgian philanthropist, and an International Committee organised its unveilling in 1931. It was intended to be an allegorical figure rather than a true likeness to Brooke. The original model is believed to have been a young man selected in Athens by its sculptor, Michael Tombros.

Of greater historical significance is Brooke’s grave, situated in a remote area to the south-west. This web site provides a guide of how to get there, details of Brooke’s life and works, his death on Skyros, and where to get further information.